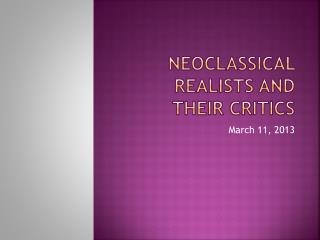 Neoclassical Realists and their Critics

Neoclassical Realists and their Critics. March 11, 2013. Legro and Moravcsik : Is Anybody still a realist?. Realism is a theory with important explanatory power. But there are problems, not created by its critics, but by its new adherents.

Neoclassical Realists and their Critics

Recap: Neoclassicism vs Romanticism - . 2 nd half of the 19 th century – realism. realism. unidealized and objective

Neoclassicism - . aka the age of reason the enlightenment. definition. neoclassicism is a literary movement of the 17 th

Magic Realism - . a literary mode rather than defined genre focuses on paradoxes and union of opposites. for example:

Magical Realism “ Realismo mágico ” - . is a artistic genre in which magical elements appear in an otherwise

Realism in France - . emerges in france as a result of interest in science empiricism—knowledge based on direct

THE CHANGING AMERICAN FAMILY - . american birthrates declined for several decades before the 1920s. trend continues in

Neoclassical Art Painting - . based on classical greek and roman art and culture show heroic people in scenes from or

The Realism War - . james, twain, and howells. nineteenth-century definitions of romance. romance focuses “upon the