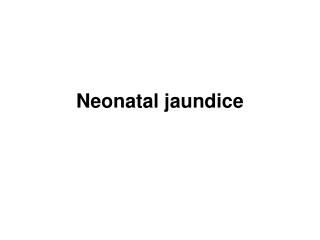 Neonatal Health - Emergency health and nutrition training. neonatal health. what can we do in crisis situations?.

Obstructive Jaundice - . michael richardson 8/20/04. obstructive jaundice. lc is a 57 yo male who presents with painless

The Postnatal Period - . chapter 6.3 . after the birth . the neonatal period is the first month after the baby is born.

Jaundice - . prepared and presented by luka marinculić mentor: a. Žmegač horvat. jaundice – is it a disease?.

PHYSIOLOGY AND EXAMINATION OF THE NEWBORN - . iwona sadowska-krawczenko md, phd. what are we going to talk about ?. what

Neonatal Jaundice SGD - . dr saffiullah ap paeds. by the end of this discussion you should be able to; 1.make a