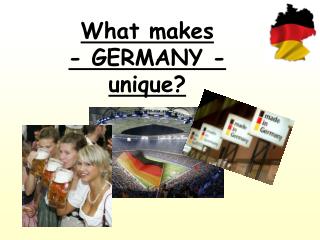 What makes - GERMANY - unique?. Famous Buildings. Brandenburg Gate a former city gate one of the main symbols Germany located west of the city center in Berlin was commissioned by King Frederick William II of Prussia as a sign of peace

The Volleyball Brand: What makes it unique? - Kathy deboer, avca executive director spring conference may 8, 2009 why

Overseas Moving Companies: What Makes Them Unique - Whether you are relocating to another country or simply want to send

WHAT MAKES THE EDWARDS UNIQUE

What are Aerocon Panels &amp; What makes it Unique? - . a sandwich panel of two fiber-reinforced cement sheets

What makes CG’s Global Education program unique? - . it’s not just that we travel, it’s the way we travel and

What Makes Drop-In Centers Unique? - Consumer-run programs and drop-in centers: providing a rationale and research base

What makes Earth unique - . where is the water on our planet ?. water storage reservoirs. water (hydrologic) cycle. water

What makes us unique. - There are variations in genes that make us unique. inversion. insertion. deletion. copy number

Unit 1: What Makes Puerto Rico Unique ? - . flag. our spanish heritage is reflected in the language and our people of

What Makes Your Graphic Design Unique? - Graphic design perth is a strong and powerful tool of representing your idea in

what makes Rose Hannah Furniture Unique? - Rose hannah furniture has been established its reputation in the furniture