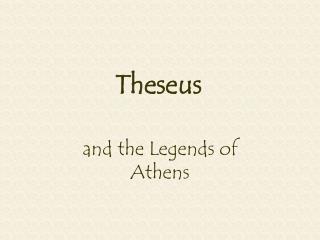 Theseus . and the Legends of Athens. Early Kings of Attica. The first king of Athens was Cecrops , who was sprung from the earth and half-serpent.

MYTHS - . theseus and the

Theseus and the Minotaur - . by: beth cooper 10/11/12. bell ringer. what makes a hero? what special qualities does a hero

Unusual Birth, Infant Abandoned, Survives Ordeal - . infant abandoned- abandoned by both of his fathers (poseidon and

THESEUS - . the hero of athens sorry if there is any inappropriate stuff so j ust be mature for a change ok ,good.

The Epic Hero - . theseus. birth. son of king ageus (king of athens) and aethra his father had to return to athens, and

Theseus - . lineage. born in troizen mother - aethra father - aegeus or poseidon. on the same night that aethra was with

The Hunger Games - . greek mythology and ancient rome. the myth of theseus and the minotaur. bad guy: king minos of crete

Theseus and Minotaur - . from greek

Thoughtful Theseus - . athenian hero known for his brains and intellect athenians would more likely be impressed with an

Perseus and Theseus - . by scott martin and brianne levek. perseus. favorite tale in greece. . . king acrisus. had a

Theseus and the Minotaur - . a brave feat… …and no more young athenians for feasts!. characters. king minos (son of