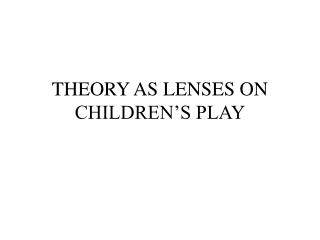 THEORY AS LENSES ON CHILDREN’S PLAY

THEORY AS LENSES ON CHILDREN’S PLAY. SIGMUND FREUD. CONTRIBUTION TO THE DISCIPLINE OF CHILD DEVELOPMENT. SIGMUND FREUD . All behavior is motivated, often by unconscious dynamics Freud’s theory of dreams emphasized the meaningfulness of dreams as manifestations of the unconscious mind

THEORY AS LENSES ON CHILDREN’S PLAY

Theory to Practice Cognitive Development and Intelligence - . linking theory to practice. why is it important to have a

Theories of Human Development - . theories. what is a theory? orderly set of ideas which describe, explain, and

Children and AIDS through different lenses - . dr sharlene swartz. 15 july 2009. outline. where do you stand? important

Literary Theory in Our Vernon L.A. and English Classrooms? Sure! - . using lenses to teach children how to interpret

My Dreams - Moments in lif e. my pet peeves. my dreams. my activities. my family. my

Session 4 Constructivism and Theories of Literacy Development - . chapters 4 and 5 tracey and

Kohlberg’s Theory of Moral Development: - . a system to study character development in literature. a sociological