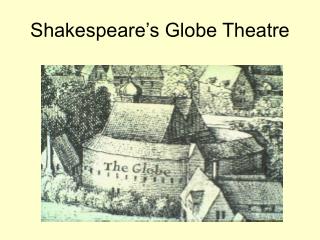 Shakespeare’s Globe Theatre. Shakespeare's Globe was the most popular English theater of its time, frequented by people from all walks of Elizabethan life.

The Globe Theater - . interesting historical facts. this sketch is perhaps one of the most important in theatrical

Shakespeare's Globe Theater - . because theater and acting were not considered wholesome entertainment in shakespeare’s

Elizabethan and Jacobean Theatre: An Introduction - . a few dates. 1576 building of the first public theatre, known as

THE GLOBE THEATRE - . presented and created by: camille mccutchon and caitlin enright!. what is the globe

Shakespeare &amp; The Globe Theatre Starter - . write down 3 things you know about the globe theatre. shakespeare

The Globe Theatre - . william shakespeare. 1. the heavens. canopy supported by pillars and hut on top. shaded actors from

The Globe Theatre - . by seth glass english 12 angie lewis. the history. 1599: the globe theatre is opened on bankside -

Globe Theater - . the globe theatre was constructed in 1598. it became one of four major theaters in london. the others

THE GLOBE THEATER - . the globe theater. by the mid-16 th century, the art of drama in england was three centuries old,

GLOBE project - . comments from the field. “global managers have exceptionally open minds. they respect how different