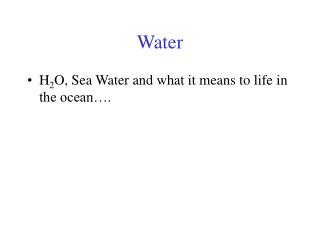 Water H 2 O, Sea Water and what it means to life in the ocean…. Figure 3.01 Hydrogen Bonds, Between water molecules Are weak, but IMPORTANT! States of water Water occurs as solid, liquid & gas naturally No hydrogen bonds in water vapor