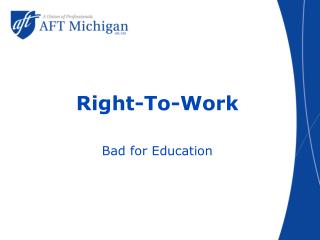 Right-To-Work. Bad for Education. What is RTW? – Public Sector. An employee cannot be required to join the union. If an agency fee provision is negotiated into the contract the employee who chooses not to join must pay an agency fee that covers contract negotiations and administration.

Employment and the RIGHT TO WORK - . the promotion of full, productive and freely-chosen employment. the right to work in

Right to Safety and Heath at Work - . standards, policy and action 2013. safety at work is in the news. begin with the

Fairness Integrity Job Growth Right To Work - . right to work. rtw is the freedom for any hoosier to be hired only on the

MS TZ IS A RIGHT PLACE TO WORK - They work as team there is no boss all are staff you work in a piece of mind. they love

Choosing The Right Accounting Firm To Work With - If you are a small business owner in sacramento, one of the most

Every worker has right to a Voice @ Work - . * dec. 6th/dec. 10th kick-off events for campaign to restore the right to