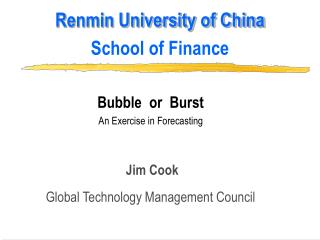 Renmin University of China School of Finance Bubble or Burst An Exercise in Forecasting Jim Cook Global Technology Management Council Preliminary Remarks "I hold that that man is in the right who is most in league with the future." Henrik Ibsen (1828-1906)

Will blockchain is going to bigger than cloud computing? - In this presentation, you will know how blockchain is