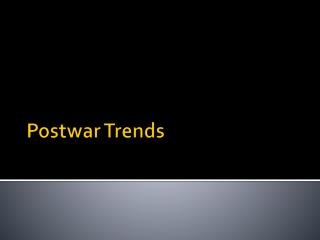 Postwar Trends. Other Zen Masters and Scholars in the War Effort.

Postwar Trends - . other zen masters and scholars in the war

Postwar Outcomes - . soviet forces occupy most of eastern and central europe and eastern germany germany and berlin are

Postwar Havoc - . the end of world war i in 1918 brought great rejoicing in america, but it was just the beginning of new

Postwar America - . american history chapter 26-1. the eisenhower era. election of 1952. truman was exempt from the 22 nd

Postwar Havoc - . essential question: what are some examples of post world war i tensions?. the end of wwi brings new

Postwar America - . popular culture of the 1950s. the new mass media. the rise of television popularity during wwii

Postwar Culture - . pursuing the american dream. the end of wwii saw us at top of the world. economic powerhouse only

Postwar Purges - . i. the problem a. communism b. corruption ii. pressure from below a. popular anti-communism

Postwar Europe - . fascist governments gone in most of europe. paves the way for communism to take over. yalta conference