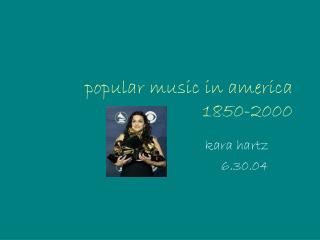 popular music in america 1850-2000 kara hartz 6.30.04 a new genre 1850s Popular music was born in America with the music of Stephen Foster. “Jeanie with the Light Brown Hair” became one of his most famous songs. Stephen Foster music unites us 1860s

Music As: IDENTITY - . who are you and what your musical choices say about you. what students will learn:. reflect on the

America’s famous people - . michael jackson, one of the most widely beloved entertainers and profoundly influential

ICONS OF AMERICAN MUSIC - A timeline of america’s genres and the geniuses that influenced them. icons of american

American Folk Music - . what is it? where did it come from? what can we learn from this type of music?. what is folk

Metal Music - . a sub-culture of the united states by: kyle ahn. metal music genres. metal music began in the late

The Music Man - . objectives. students will be introduced to the musical, the music man , by completing a worksheet as

Modern Popular Music - . modern popular music. questions what is the difference between “pop” and “popular”

History of Music &amp; Technology - . from the beginning to today. “music used to be about what you could achieve