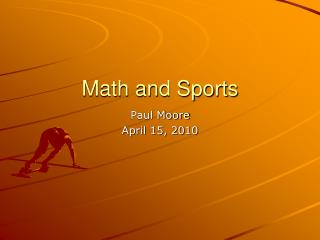 Pythagorean Theorem Math in Sports - . let’s take a look at how it is used in football to start.

SPORTS POLICY AND THE SPORTS ENVIRONMENT - . rules of sports and activities modified rules for children matching of

Games and Sports - . they play football ,chess, b aseball, basketball with gravity or with out. government. they a good

Sports and Mathematics - . by: jonah r. mathematics used in sports . math is used a lot in sports, f rom finding the

Sports and Games - Sports. in the uk many sports are popular.there is a large variety of sports and some are popular