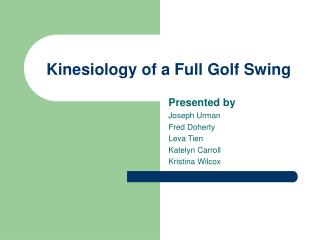 Kinesiology of a Full Golf Swing

Kinesiology of a Full Golf Swing

Java's Graphical User Interface Toolkit - . windows, applets and all that swings. what is swing?. a swing tour. a tour of

Chronosynclastic Infundibulum - . a quiz on speculative fiction. 1 a) this is a panel from which comic? b) which

More Swing - . chapter 14. objectives. learn to add menus, icons, borders, and scroll bars to guis learn to use the

All About Android - . java swing and graphics. what we’ll cover. file choosers and color choosers menus more about text

“It Don’t Mean a Thing (If It Ain’t Got that Swing)” - . jazz in america: the curious student’s guide. what is