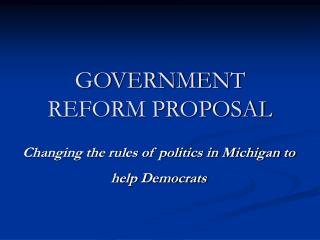 GOVERNMENT REFORM PROPOSAL. Changing the rules of politics in Michigan to help Democrats. The problem: A historical view. Democrats have not controlled the entire State Legislature in 25 years

Local Government Reform - . nature of the problem. the nobles used to be in charge of local affairs a system had to be