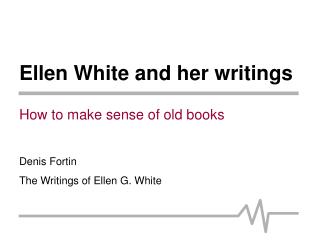 Ellen White and her writings. How to make sense of old books Denis Fortin The Writings of Ellen G. White. The need for correct interpretation. Any sacred text, such as the Bible, written years ago require that some basic rules be used in order to understand what was written.

Ellen White and her writings - Thus in a very religious, and apparently wise, way he was presenting matters in ... 1.

Concepts of Revelation and Inspiration - . denis fortin writings of ellen g. white. the issues. most difficulties with

Ellen Ochoa - . by: jasna jaramillo. the beginning. born in may 10, 1958 in los angeles california humble family she grew

Bhagats Bani - Some questions you may have? . how does one religious movement explicitly incorporate the writings of

Assurance of Salvation In Scripture and Ellen White - . the problem. many christians who sincerely believe in jesus do

Smiley Face Tricks for Writing - . based on the writings of mary ellen ledbetter. repetition for effect. ☺ repeat a

Ellen Gallagher - . by mary kate effner. subjects: seems to be a yearbook or something similar to a year book things in

Week 7 Writings from Within - . dr supriya akerkar. outline for this lecture. discussion of nuigi and achebe as post

Bhagats &amp; Bani - . an introduction. some questions you may have?. how does one religious movement explicitly

Writings of Martinez - . nic martinez mcgee 1a. table of contents. letter to the reader 25 things to do before i die six

How to Interpret the Bible and the Spirit of Prophecy - . adapted from james zackrison “how to use and interpret the

Border crossings Ellen Goldberg - Human beings are not free to roam the world. country borders are guarded by soldiers

CIBELES FASHION SHOW The first model is using a Bikini compound for a white top and white panty; - Sandals beige. the

Counsels on Health from Ellen White - . selected by don hall, drph. health in the spirit of prophecy. she [ellen

Education By Ellen G. White - . poetry &amp; song. poetry is language used in special ways so that its sound reflects