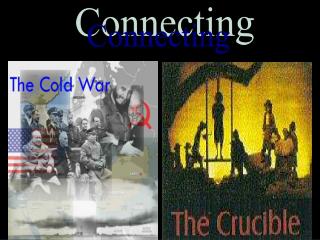 Connecting. 1692 Salem Witch Trials. This is the basis for Arthur Miller’s screenplay, The Crucible . Who was executed, why?. "A Deadly Game". In what year did the Salem Witch Trials take place? Who was the first individual executed? How many were executed? Killed?

Connecting to the Network - . introduction to networking concepts. part 1 - objectives. explain the concept of networking

AGENDA 21 CONNECTING THE DOTS - . the transformation of america that is taking away our liberties. prepared by richard

Connecting the Lattice Points: What Lattice QCD can tell us about the Quark Gluon Plasma - . what experiment can tell us

WATERSHEDS - . presented by (your name here). connecting weather to the environment. produced by the comet ® program in

Connecting your Executive Board with your Lean Six Sigma Implementation - Presented to: lean, six sigma &amp;

Oracle Data Integrator Topology: Connecting to the World - . 3. objectives. after completing this course, you will:.