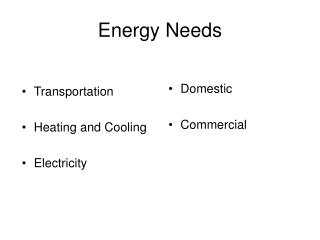 Transportation Heating and Cooling Electricity Domestic Commercial Energy Needs Electricity generation - whether from fossil fuels, nuclear, renewable fuels, or other sources - is usually * based on the fact that: http://www.hawaii.gov/dbedt/ert/electgen.html

European Energy Trading - For all your needs related to european energy trading, bcm energy is the name you can trust

Chapter 10 - Photosynthesis Life from Light and Air - . energy needs of life. all life needs a constant input of energy

Needs for Energy during the 21st Century - Mit report on the future of nuclear power in the united-states : review and

Energy - . foundation. learning objectives. to define energy and explain why it is needed. to identify sources of energy