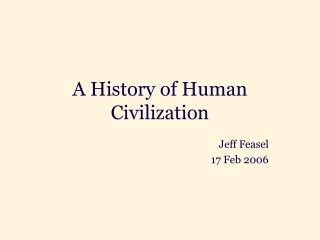 A History of Human Civilization

A History of Human Civilization. Jeff Feasel 17 Feb 2006. What we’ll learn. Brief overview of human history. What does the archeological record show? Discuss which factors contributed to human civilization. When Did Human History Happen?. [ See Timeline ]

A History of Human Civilization

History of Western civilization - . antiquity (before ad 500). the division of europe into a western (latin) and an

Pre-History and The Beginnings of Civilization - . what is pre-history? the time before people kept records (writing).

Origin of Man and Early Human Societies - . world studies . where did humans come from?. creationism. evolution. the

Chapter 1: From Human Prehistory to the Early Civilizations - . objectives examine the indicators of civilization,

Introduction: Western Civilization in the Modern Era - . the end of history and the last man - francis fukuyama