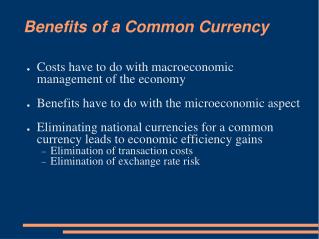 Benefits of a Common Currency Benefits of a Common Currency

Lectures 26 - 27 - . the euro. in 1961 the economist robert mundell wrote a paper discussing the idea of a currency area,

Cryptocurrency Vs Fiat Currency | Rilcoin.io - Fiat currency is the currency monitored by the government which has its