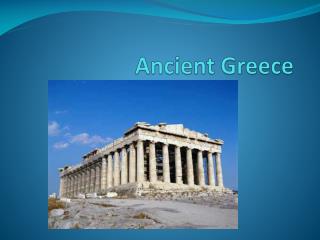 Ancient Greece. 8-1 Mountains and Seas. What to Know: How did geography influence the development of early civilizations in Greece? Vocabulary Peninsula : A stretch of land almost completely surrounded by water Isthmus : A small strip of land connecting larger land areas.

Ancient Israelites - . they believed in one god who set down moral laws for his people. they recorded their history in