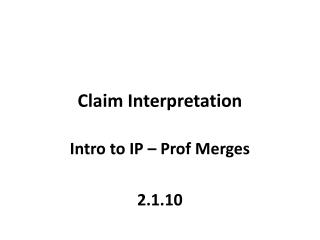 Claim Interpretation - . claim interpretation. is the careful consideration of each and every word in a claim to

Claim Interpretation - . by: michael a. leonard ii and jared t. olson. overview. claim interpretation is the process of

Claim - . starch is digested into sugar a polysaccharide is changed to a sugar the enzyme salivary amylase will breakdown

CLAIM - 3 rd level; the “so what” you are trying to prove. proof of evidence/data. served by qualifier (the

CLAIM - . or. no claim. claim or no claim. slides will have production records or situations typical in cacfp. determine

claim - In 1852 he joins his uncle on a gold claim outside of san francisco. claim. the gold prospectors build a shack on

Claim - . verb: state or assert (be sure) that something is true. noun: an assertion of (to say with confidence) the

Interpretation - . by laura pallas. why is having an interpretive plan important?. [about songs] only from life itself