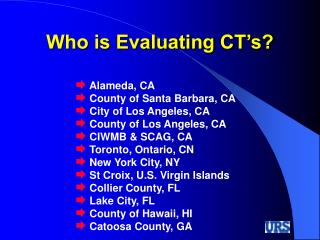 Who is Evaluating CT’s? Who is Evaluating CT’s?

Evaluating Employee Performance - . effective and legal performance appraisal systems. are job-related and based on a job

Evaluating the Performance of Specialized Professionals in a MTSS - . amm - september 11, 2012. evaluating specialized

Evaluating the Use of Actemra ® ( tocilizumab ) for the Treatment of Rheumatoid Arthritis - . brianna borgia university

Traditional and Contemporary Models of Assessment - . testing is only one method of evaluating progress and determining

Evaluating HRD Programs - . effectiveness. the degree to which a training (or other hrd program) achieves its intended