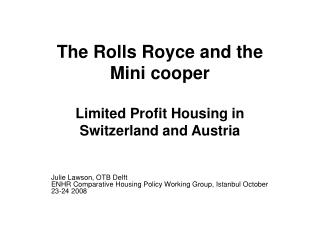 Rolls-Royce Ghost - The rolls-royce ghost is a luxury saloon from rolls-royce motor cars. the "ghost"

Rolls Royce Repair Service - At prestigious euro cars, we have the experience, knowledge and tools to service or repair

Rolls Royce Chauffeur Sydney - Are you looking out for rolls royce chauffeur sydney? the rolls royce hire benefits make a

Rolls Royce Rental Dubai - Looking for a stylish and fast platform for travelling in dubai? if yes, take a look at the

The Tourism Geography of Austria, Germany and Switzerland - . learning objectives. 1.      describe the major

Rolls Royce Hire For Rent - Alive with cutting-edge technology, ghost is one of the most advanced cars ever built. the