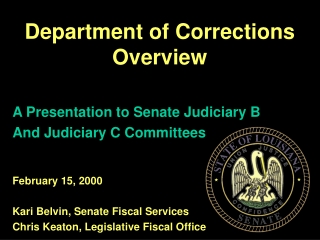 A Presentation to Senate Judiciary B And Judiciary C Committees February 15, 2000

A Presentation to Senate Judiciary B And Judiciary C Committees February 15, 2000

Progress: Implementation of Correctional Supervision and Parole Board: Klerksdorp - . building a caring correctional

Expectations of Justice/Correctional Technology through 2021 - . an accompanying educational paper can be found with this

Juvenile Delinquency &amp; Crime &quot;Who Is At-Risk?&quot; - . statement of the

Professional Ethics in Criminal Justice-Spring 2014 - . ethics. ethics are concepts of right and wrong conduct which

Life of an Inmate - . by: gabriella stratford. defined as “a person deprived of liberty under involuntary restraint,

CHAPTER ONE - . an overview of the american legal system. u.s. justice system. branches of government legislative

Deviance and Social Control - . chapter 8. crime in the

Criminology and Law - . crime and criminal law. is the law for purposes of social control and social engineering, or for