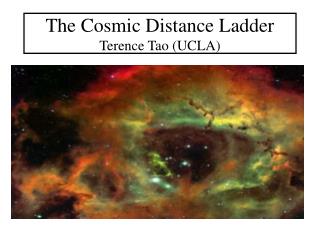 The Cosmic Distance Ladder Terence Tao (UCLA). Astrometry. An important subfield of astronomy is astrometry: the study of positions and movements of celestial bodies (sun, moon, planets,stars, etc.). Typical questions in astrometry are: • How far is it from the Earth to the Moon?

Ladder Cable Tray Manufacturers - Planning to install a cable tray in your industry? if the answer is yes, then you are

The Cosmic Distance Ladder - . where it takes us and how. alankar kotwal. iitb. earth. why ladder?. decreasing accuracy,

HST and Astrometry in the 2010 Decade - . william van altena yale university, new haven, ct usa. with thanks to : jay

Presented by Terence J. Hoyt - A brief history of wealth distribution in the united states there are three highly

Hubble s Law - Learning objectives. to know:- what is hubble's law. how to measure hubble's constant from a graph. how to

The WHO Analgesic Step Ladder - . strong opioid +/- nsaid +/- adjuvant. if pain is unrelieved on lower step, then