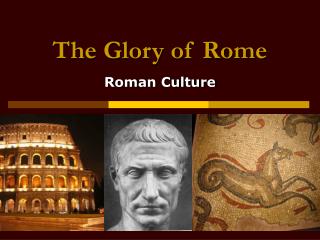 The Glory of Rome Roman Culture Preview Today you will… See how the Pax Romana led to thriving culture in Rome. Describe Greco-Roman civilization. Compare Greek and Roman civilization to today. Review What are the three periods of Roman history?

THE HOPE OF GLORY - October 24, 2010. the hope of glory. background information. paul imprisoned (4:3) informed by

The Glory of God… - . the heavens declare…. design demands a designer. there is intricate, incredibly complex design

The Weight of glory

The Glory of the Cross - . “but god forbid that i should glory, save in the cross of our lord jesus christ, by whom the

Ancient Rome The Fall of Rome - . roman rap this is the roman empire hannibal running around setting cities on fire.

The Glory of Greek Civilization - . classical greece 2000b.c. – 1a.d. three aegean civilizations. what direction is the

Seeing the Glory of Christ - . april 26. think about it …. what is the most spectacular event you have ever witnessed?

TITLE: The Glory of Work - . text: ephesians 6:5-9 theme: the believer should use his work to glorify god. migrant

And the Glory of the Lord - . an introduction to set work number 1. by the end of this lesson you will be able

Ancient Rome Exploring the city of Rome - . date: 1 /20/ 2012 daily question: how did the architecture of rome represent