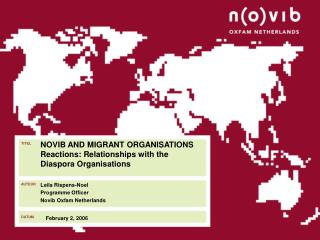 NOVIB AND MIGRANT ORGANISATIONS Reactions: Relationships with the Diaspora Organisations

NOVIB AND MIGRANT ORGANISATIONS Reactions: Relationships with the Diaspora Organisations