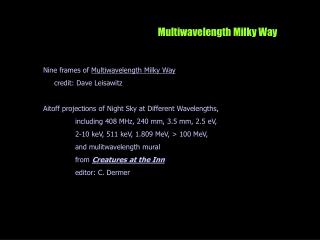 A Tour Of The Solar System - . galaxies. galaxies are huge regions of space that contain the stars, planets, and other

SAFETY FAIR 2013 - . patient care module for the environment of care. latex allergy. what is latex? latex is the milky

Nutella - . and its ingredients by: marissa b. description of nutella. it is a chocolate, hazelnut spread that was first

The Big Bang Theory - . galaxies: islands of stars making up the universe. edwin hubble. first to realize that galaxies

Lab 11 - Astronomy 105 laboratory. lab 11. lab quiz 11. hubble discovered that galaxies are moving away from the milky

C.17 The Milky Way - . when we try to pick out anything by itself, we find that it is tied to everything else in the

Chapter 19 Our Galaxy - . 19.1 the milky way revealed. our goals for learning what does our galaxy look like? how do