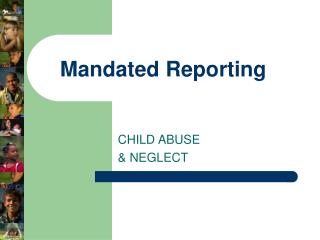 and Time Reporting - . day sheets. why keep day sheets?. primary purpose is to compute percentages of time spent by staff

Beat reporting - . what is the beat system? what is the reporter’s role?. divides coverage into logical areas that

Event Reporting and Patient Safety: - You can’t fix it if you don’t know about it! harold s. kaplan md columbia