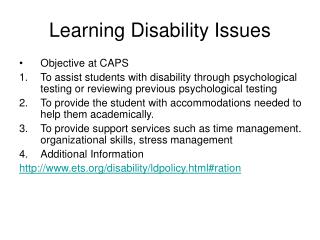 The Accelerated Learning Program - . the community college of baltimore county. agenda for the day. introduction to alp

The International Classification of Functioning, Disability and Health (ICF) - . a tool for self-learning. german who-fic

Why So Many Are Not Succeeding? Are We Missing the Learning Disability? - . glenn young learning disabilities consultant

Eye Disability Rating - . fall conference 2009 steve heye / jim sampson. what is important for me as a cso to know. va

LD in 2003: Revitalizing, Reauthorizing, and Reconceptualizing our Definitions, Assessment, and Interventions of

Supervision and Learning Styles - . outline of morning session: cover the process of supervision in relation to learning