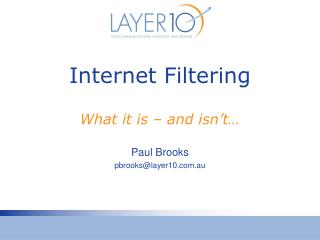 Internet Censorship - . outline. what is censorship? brief history why and why not censor the internet? pornography hate

Internet Safety for Children - . et 524 vinnie augden. what is the purpose of this lesson?. common uses of the internet.

Internet use &amp; safety - . drew foster intro to computers-7 th grade. what's a password. using a phrase that is

THE FILTER BUBBLE - . what the internet is hiding from you eli pariser. “we shape our tools and thereafter our tools

Internet Censorship - . what is internet censorship. control or suppression of publishing or accessing information on the

Internet Filtering - . what it is – and isn’t…. paul brooks pbrooks@layer10.com.au. problem…. or is it a