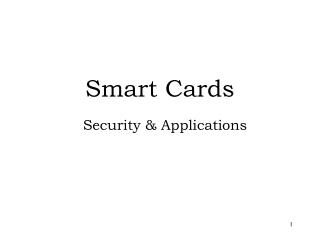 World Smart Card Market Worth US$6.6 Billion - Marketsandmarkets incorporated this report based on both primary and

SMART CARD - . under the guidance of. mr.prabhat kumar mohapatra. smart cards-what are they? a smart card (chip card) or

Smart Cards and E-BUSINESS - . what is a smart card? a smart card is the size of a conventional credit card, with an

Smart Card Technology Presented by: Jose R. Paloschavez - . agenda. history what is it? manufactures of hardware types of

SMART CARDS - Contents of today’s lecture: 1. introduction what is a smart card? use of sm’s objectives future views