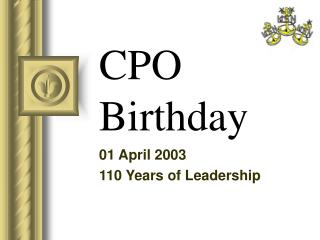 What is CPO? - . i. introduction a traditional chinese proverb says “may you live in interesting times”. i think that

The CPO Playbook - An extended service plan is a smart move. it confirms that you do indeed have a specific idea of how

CPO Selection Board - . cpo selection board. what should i include in my package to the board? letters to the board

CPO Users Forum - . managing group work in the classroom managing the equipment between teachers. working in groups. this