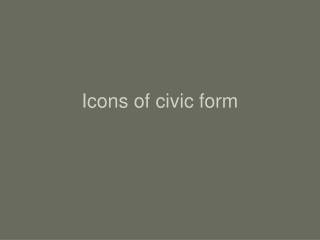 Icons of civic form Competition between elites within a city was not the only factor in the drive to monumentalization; competition between cities was important as well There were often upgrades as cities tried to keep up with their neighbours: wider streets; larger temples and public buildings

Learning To Love Forms (WebVisions '07) - Forms. we all have to make 'em, but few of us love 'em. aaron gustafson

From 06-07 DPI 4th grade indicators - . math vocabulary. goal 1. a real number that can be written as a positive or

Construction Proposal - . features. the proposal form is an offer and a promise to enter into a contract if selected a

Static Single Assignment Form - . the material in these slides have been taken from chapter 19 – static

Why the long form? - . @ tomnew _. a little about formisimo advanced form analytics tool (out of beta!) tracks every