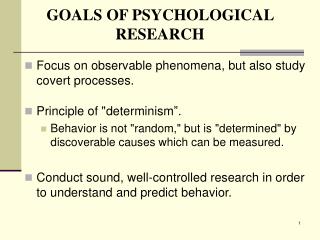 GOALS OF PSYCHOLOGICAL RESEARCH. Focus on observable phenomena, but also study covert processes. Principle of "determinism”. Behavior is not "random," but is "determined" by discoverable causes which can be measured.

Physiology Exam 1 Study chapters 1-5 - . the cytoplasm includes all material inside the cell membrane except

Section 1 Chapters 1-4 - . what is the caption of the poster on the wall?. big brother is watching you. what are the four

Revelation 7 Churches (Chapters 1-3) - . revelation 1:1-20 the revelation of jesus christ, which god gave unto him, to