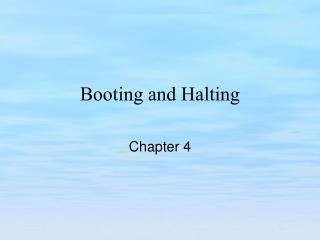 Booting and Halting Chapter 4 Examine the sequence of events that occur when a system is booted. Examine the methods used to modify the boot sequence. Examine how to use the PROM monitor to select alternate boot devices. Examine the boot manager and boot loader.

Halting Deforestation: Reflections from the Air, on the Ground, and in the Experimental Lab - . elinor ostrom . many