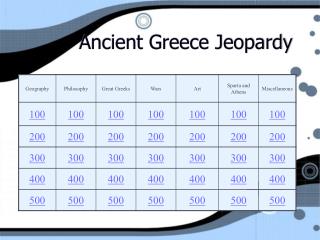 Ancient Greece Jeopardy Geography 100 To get from Athens to Troy by boat you would need to cross this Sea Geography 200 The Minoan Palace of Knossos was located on this island Geography 300 Greeks came here, the perceived center of the world, to have all their questions answered.

The Big Ideas of Ancient Greece - . an abbreviated list. we build our “important buildings”. the white house: front

Classical Europe Ancient Greece and Rome - . how did ancient greece and rome influence our history and culture?. ancient

Ancient Greece Quiz - . version a. which of the following bodies of water was central to greek civilization?. red sea

Should the United States attempt to emulate or correct the mistakes of Ancient Greece? - . unit 5: ancient greece.

Introduction to Ancient Greece - . geography of greece . greece is a small country in the south-east of europe. near the

Grade 9 Geography Unit 2 – Global Connections Jeopardy - . a name given to nations that are generally considered to be