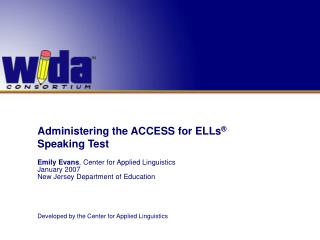 How ACCESS for ELLs levels work in the Classroom – Part I: Establishing the Context - . don bouchard mdoe esl

Using Data from ACCESS for ELLs - 2. i. to provide a brief refresher on access/data reporting;ii. to examine immediate

ACCESS for ELLs Reporting Webinars - . may 2013. interpreting and using access for ells scores. when is a student likely

Section IV: Pathways for Advocacy with ELLs - . strategies for engagement. to best respond, educate yourself:. understand

What is ACCESS? - What access, the new virginia test for lep students, means for school districts lep caucus presentation

Striving For Authentic Assessment of ELLs - . the issue of grading. how do teachers grade ells that are newly arrived