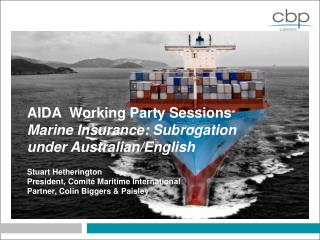 MARINE INSURANCE - . lecture 15 week 8. development. one of the earliest forms of insurance developed out of bottomry and

Australian English - . by victoria kosareva. there are different territorial variants of english. it is a regional

Marine Insurance - . purpose. the purpose of marine insurance is to protect ships and their cargoes against sea-risks. a

Australian English Part 2 - . morphology and phonology. morphological features. diminutives: the system by where we

Report Back from Working Sessions - . working session: 1325 and displacement: the protection and participation of