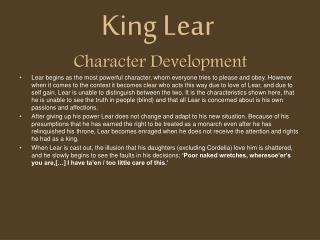 Lead-in - . do you know his name? have you ever read his books?. shakespeare— a famous english poets, playwright. the

Oedipus the King - . oedipus the king also known by the latin title oedipus rex , is an athenian tragedy by sophocles

Character Analysis for the Tempest - . by: see won k. + pablo l. #1: gonzalo. summary. gonzalo is the advisor to alonso

The French Revolution - . fundamental causes of the french revolution. abuses of the old régime. (1) political. 1.) king

FOIL CHARACTERS - . a foil character is a person who contrasts with another character (usually the protagonist) in order