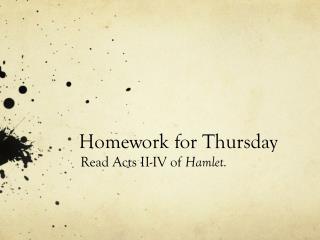 Homework : Read/OL 18.2 for Tuesday after break - Frontpage : nnign. if you want to be insanely secure; simply choose

Happy Thursday, lovely people! - . november 14, 2013. homework check. take out your homework from last class and have it Learning Log Homework Due in Tuesday 8th July 2014 - Literacy: l.o. to recount write a recount of your trip to the zoo. Learning Log Homework Due in Tuesday 1st July 2014 - Pshce: l.o . to write about changes. what changes have you

Hook, Housekeeping &amp; Homework Monday - . truth is stranger than fiction: 2 truths, 1 lie which one is the lie

Hook, Housekeeping &amp; Homework Monday - . while you wait… have out your choice reading book and start