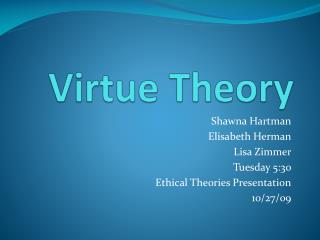 Virtue Theory. Shawna Hartman Elisabeth Herman Lisa Zimmer Tuesday 5:30 Ethical Theories Presentation 10/27/09. What are Virtues?. Character traits/Attitudes There are many different kinds of Virtues. Virtues can be balanced. What is Virtue Ethics?. Aristotle/Virtue Theory Basics - . do agent based theories avoid the problems of action-based deontological and

VIRTUE - . midn 1/c smetana midn 1/c stanton. virtue. “bravery to endure and bear up against evil and danger, as well

VIRTUE - . definition catalogue. definition of virtue. a state of character or habit which is the result of

VIRTUE - . and vice. virtues are thought to be closely connected with our moral characters. they are the sorts of

Virtue - . virtue- is a good habit that helps us to act according to god’s love for us. vice- is a bad habit. two types

VIRTUE - . midn 1/c smetana midn 1/c stanton. virtue. “bravery to endure and bear up against evil and danger, as

Virtue Ethics - . jane comes to cheer you up in the hospital in order to fulfill her sense of duty to the notion of

Virtue Ethics - . return to virtue. the moral vacuity of duty-following a good person should want to do the right thing