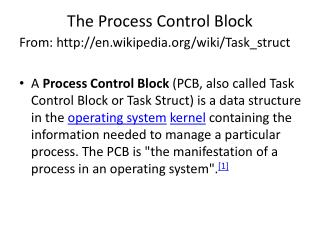 The Process Control Block. From: http://en.wikipedia.org/wiki/Task_struct

Process Description and Control - . b.ramamurthy. introduction. the fundamental task of any operating system is process

Processes - . dr. yingwu zhu. process concept. process – a program in execution what is not a process? -- program on a

Operating Systems - . terms and definitions. chapter objectives. after completing these slides you will: you will have a

Operating Systems - . process management. what is a process?. the basic unit of software that the operating system deals

Operating System 3 PROCESS DESCRIPTION AND CONTROL - . processes requirements. the os must interleave the execution of