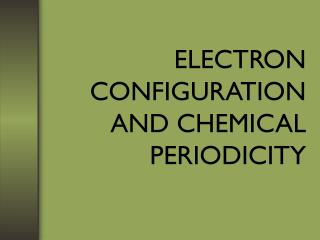 ELECTRON CONFIGURATION AND CHEMICAL PERIODICITY. In previous chapter we learned a new understanding of matter and energy which in turn led to the quantum mechanical model of the atom

Chemistry ELECTRONIC STRUCTURE Electron Configurations - . do now: what are the four quantum numbers? calculators not

Chapter 6. Electronic Structure and Chemical Periodicity - . the periodic law states that when elements are arranged in

Electron Configurations and the Periodic Table - . the periodic table is arranged by how the electrons within an atom

PERIODICITY - . electron configurations. the chemistry of an atom occurs at the set of electrons called valence electrons

Atomic Electron Configurations and Chemical Periodicity - . we know the electronic structure of the hydrogen atom states

Chemical Periodicity - . a brief history of the periodic table of elements and their properties. dimitri mendeleev. was a