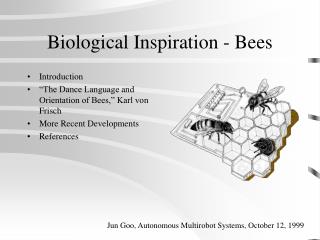 Biological inspiration - . animals are able to react adaptively to changes in their external and internal environment,

BEES - . the colony. the honeybee is a social animal that lives in a remarkably well-organized colony consisting of three

bees - . by: ciara bennum. why i chose bees. i chose bees because they’re helpful to everyone and i think people miss

Bees! - . by bronte hemming's. the life cycle!. 1. the queen lays each egg in a different cell of the honeycomb. 3. after

Bees - . environmental ethic because humans are responsible for ecological crises, human endeavors should be conducted in

bees - By samuel and jack. bees. bees spit pollen to other bees. yuk!!!. a bees wings flap really fast. this box is used

Bees - . environmental ethic because humans are responsible for ecological crises, human endeavors should be conducted

Bees - . a bee is an insect. its body has three parts, head, thorax and abdomen. the bees legs and wings are attached to