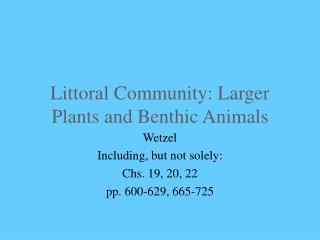 Pond Animals - . zonation. life in a pond is correlated with its zonation into the littoral, limnetic, profundal, and

Chapter 18 The Benthos: Dwellers of the Sea Floor - . 18.1 algae and plants. general characteristics of benthic algae

Benthos - . benthos: definitions. epifauna: live on or are associated with the surface infauna: live within the substrate

Water Ecosystems - . 1.03 explain why an ecosystem can support a variety of organisms. temperature and precipitation

Marine Ecosystems - . salt water!!!. life in the oceans. everyting is shaped by abiotic factors all shapes and sizes .

Marine ecosystem - What covers almost three-fourths of the earth’s surface? what holds both the larges animals and some

Aquatics - . freshwater ecosystems lakes and ponds. what is an ecosystem. an ecosystem is a complex set of relationships

Benthos - . unlike the drifting plankton and swimming nekton , benthic organisms – commonly referred to as benthos –

Habitats for Plants and Animals by Denise Carroll - . what is an environment?. plants and animals live together in many