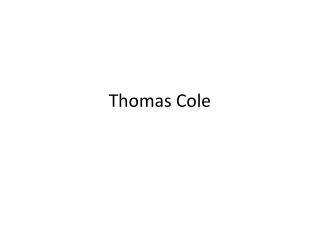 Thomas Cole. Early Life. Thomas Cole was born in 1801 at Bolton, Lancashire in Northwestern England. Cole came with his family to the United States in the early 1818. They settled in Ohio. Starting in portraiture, he shifted to landscap es. In 1825 he moves to New York City.

Symbolism in Hudson River School - . the hudson river artists were in search of an art form that would allow them to

Hudson River School Group of artists led by Thomas Cole, an immigrant from England - . inspired by the natural beauty of

Cole Bjork Shoe company - . by c ole bjork. shoe name. the name of the new sport boot will be named, “the explorer.”

Landscape Art and Romantic Nationalism in Germany and America

THOMAS COLE - . “a something not found