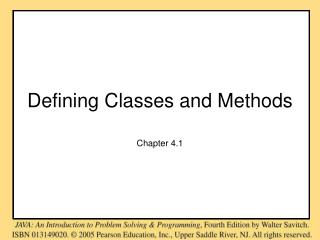 Defining Classes and Methods. Chapter 4.1. Key Features of Objects. An object has identity (it acts as a single whole). An object has state (it has various properties, which might change). An object has behavior (it can do things and can have things done to it).

Classes &amp; Objects - . lecture-6. classes and objects. a class is a 'blueprint' for all objects of a certain type

Class and Object - . class vs object. let us consider the following scenario… class defines a set of attributes/fields

Classes - . in c++. what is a class. can make a new type in c++ by declaring a class. a class is an expanded concept of a

Chapter 6: A First Look at Classes - . starting out with java from control structures through data structures 1e by tony

Chapter 10 Classes and Methods IV: Static Methods and Variables - . lecture slides to accompany an introduction to