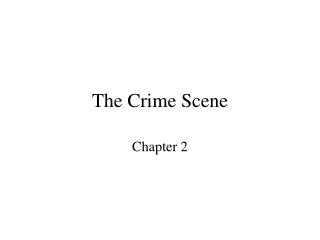 The Crime Scene. Chapter 2. Processing. Physical Evidence - encompasses any and all objects that can establish that a crime has been committed or can provide a link between a crime and its victim or a crime and its perpetrator.

An alternative name to conceal identity - . alias. an explanation that removes a person from the scene of a crime. alibi.

Wednesday 4/9/14 - . aim: how is dna useful to forensic science? do now: list at least 4 sources of dna that could be

Neighborhood Watch - . what is neighborhood watch?. community based crime prevention program the eyes and ears to help

Electronic Crime Scene Investigation: A Guide for First Responders - . written and approved by the technical working

Financial Crime: What does it mean to Investec? - . mlros.com february 2007. financial crime:. what should we consider?