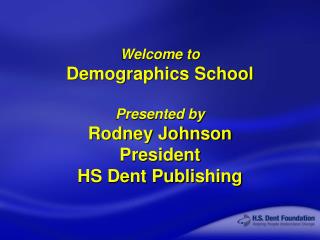 Welcome to Demographics School Presented by Rodney Johnson President HS Dent Publishing - . how many clients do you have?

Welcome to Anderson HS - . mr. phillip bristow pre-ap world history. about me. graduated in 2005 with a degree in history

Welcome to HS 310 - . understanding diversity, self awareness and change. introduction and “check in”. tell us who